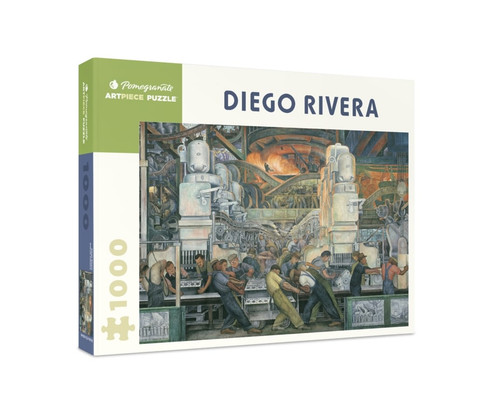 In Stock
Serious Item Code: 20516  Mfr Code: AA421  Brand: Pomegranate Season: Theme: People Americana Folk Art Latin America Event: Type: Difficulty: Advanced  Finished Size: 29'' x 20''
Detroit Industry, north wall (mural detail), 1932–1933, by Diego Rivera (Mexican, 1886–1957) During the Great Depression, a series of commissions allowed Mexican muralist Diego Rivera to leave his mark on the walls of the United States. William Valentiner, the director of the Detroit Institute of Arts, commissioned him to paint the walls of the museum's classical Garden Court. Edsel Ford, the president of the Ford Motor Company, agreed to fund the project and became a great champion of the artist. The vast factory Ford built on the Rouge River, where Rivera spent days sketching, provided the images for the mural’s largest panels, including the one reproduced for this 1,000-piece jigsaw puzzle.

Diego Rivera (Mexican, 1886–1957) was a world-renowned painter, also remembered as the high-tempered husband of Mexican artist Frida Kahlo, with whom he shared a devotion to radical politics and Communist ideals. He traveled the world, and in Europe experimented with Cubism and Postimpressionism early in his career. But his most recognizable works often featured issues of social inequality, and were painted in a straightforward style indebted to pre-Columbian art and folk art. An interest in fresco painting led to what he considered the best work of his career: the Detroit Industry murals. Created as part of a 1930s US public works program, his monumental creation has come to symbolize the spirit of hardworking laborers as well as the advances of science. He is widely considered one of the most influential Mexican muralists of the 20th century.