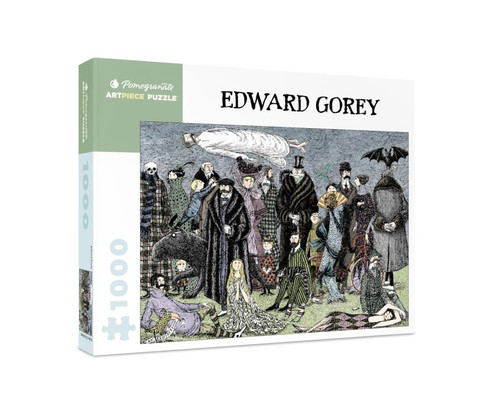 In Stock
Serious Item Code: 49371  Mfr Code: AA820  Brand: Pomegranate Season: Theme: Fairy Tale Gothic Gorey Event: Type: Difficulty: Intermediate  Finished Size: 29'' x 20''
Untitled, 1965 All of Edward Gorey's characters inhabit a uniquely enigmatic world, where situations and relationships are alluded to but usually not explained. Take this group: the bird in the lower left holds a banner in its beak, declaring “An Exhibition.” One wonders: have they all arrived to see a show, or are they the show? And what’s with the guy floating above in his nightgown, let alone the masked man on the red bicycle? On the far right—that must be Gorey himself, topped with a bat. Study all of these weird and wonderful characters as you piece together this 1,000-piece puzzle.