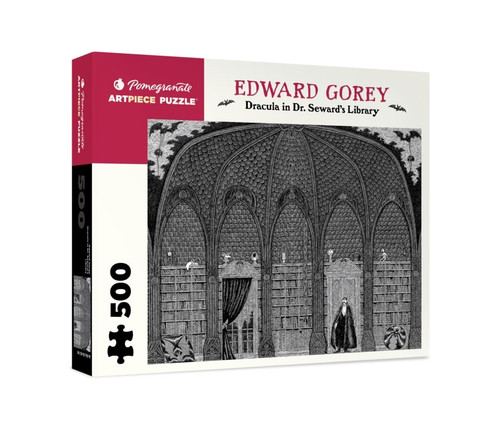 In Stock
Serious Item Code: 49332  Mfr Code: AA711  Brand: Pomegranate Season: Theme: Fairy Tale Gothic Gorey Event: Type: Difficult Puzzles Difficulty: Intermediate  Finished Size: 24'' x 18''
Dracula in Dr. Seward’s Library Author and illustrator Edward Gorey was also was a set and costume designer for innumerable theater productions from Cape Cod to Broadway, including a celebrated staging of Bram Stoker’s Dracula, for which he was awarded a Tony. One of Gorey’s stage designs for the play is reproduced for this 500-piece puzzle, giving you the opportunity to study his exquisite cross-hatched drawing technique up close.