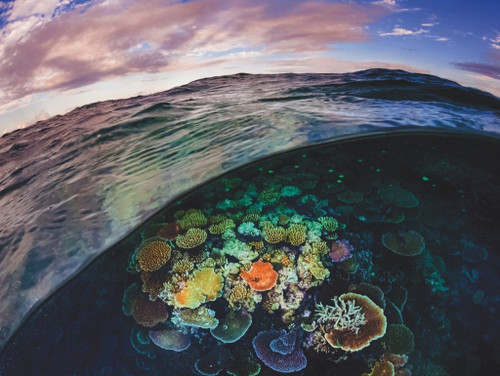 In Stock
Serious Item Code: 67368  Mfr Code: NPZNG1989  Brand: New York Puzzle Co Season: Theme: Sea Life Ocean Event: Type: Difficulty: Advanced  Finished Size: 26.625'' x 19.25''
You can spend a lifetime exploring the Great Barrier Reef and still not see all of this colorful coral realm—it’s nearly the size of Montana. Sprawling off the east coast of Queensland, Australia, the Great Barrier Reef is not a single reef but a group of more than 2,800 distinct entities. It stretches over 1,250 miles (2,000 kilometers) north to south and covers some 135,000 square miles (350,000 square kilometers) in total.

The reef system is the largest structure on Earth built by living organisms, tiny hard corals that are no bigger than a fingernail. When corals die in countless numbers their limestone-secreted skeletons build upon one another to form the bedrock of the reef. The magnificent structures we see today were produced by a slow process played out over millions of years. Reefs grow only about half an inch (1.3 centimeters) a year.

Some 2,000 different fish species have been identified on the Great Barrier Reef, and new ones are found each year. Scientists estimate that the reef is home to 4,000 mollusk species and over 250 different shrimp species. Even the corals that construct the reef itself are diverse—numbering some 400 species.

This colorful aquatic ecosystem is home to a staggering diversity of plant and lower animal life but is also frequented by larger species like dugongs, sea turtles, sharks, and dolphins.

Who's Got the Guinness