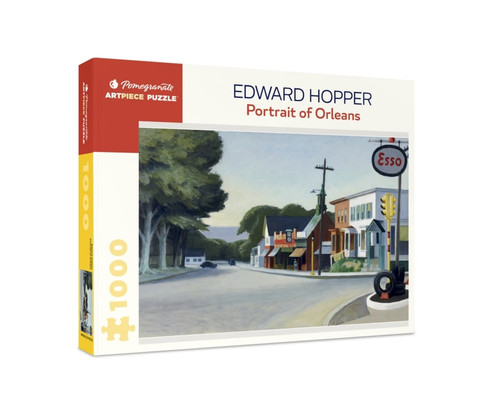 In Stock
Serious Item Code: 60299  Mfr Code: AA1002  Brand: Pomegranate Season: Theme: More Art City & Place Art Event: Type: Difficulty: Advanced  Finished Size: 29'' x 20''
Portrait of Orleans, 1950 Edward Hopper’s distinctive oil paintings convey subtle emotion, often construed as loneliness. A single figure populates Portrait of Orleans, imparting a sense of silence to the nearly deserted scene. Still, Hopper repeatedly maintained that his interest lay in capturing light rather than conveying a mood. “I like long shadows and early and late sunlight. I am very much interested in light, and particularly sunlight, trying to paint sunlight without eliminating the form under it, if I can.” Hopper traveled throughout the United States for more than 40 years, recording everyday views of people and their surroundings.

Edward Hopper’s distinctive oil paintings convey subtle emotion sometimes construed as loneliness. Often, a single figure populates a scene, imparting a sense of silence. (Hopper himself did not talk much. A friend of his reported, “Hopper had no small talk; he was famous for his monumental silences.”) Still, Hopper (American, 1882–1967) maintained that his interest lay in capturing light rather than conveying a mood. Among his influences were the Ashcan School of gritty realism and Impressionism, whose use of outdoor light he admired. Hopper sold his first piece at the 1913 Armory Show. Ten years passed before he sold another, but in the following year, when he exhibited at a New York gallery, his work sold out and established his reputation. For most of his roughly 60-year career, Hopper divided his time between New York and New England. He is recognized as one of the 20th century’s greatest realists.