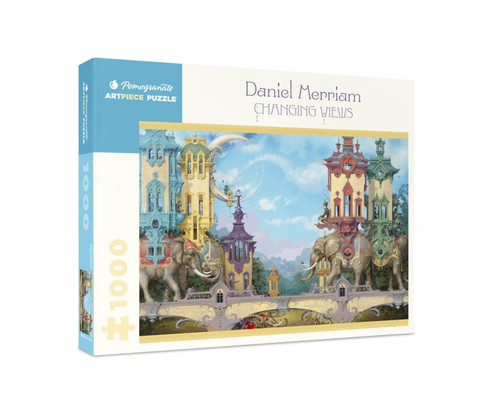 Surreal. Romantic. Phantasmagorical. The artwork of Daniel Merriam (American, b. 1963) features ornately decorated Baroque buildings that are suspended in trees, crafted over waterfalls, and carried on the backs of elephants and cats. Likewise, the characters who populate Merriam’s wonderland dress extravagantly as they travel in hot air balloons and ride carriages and penny-farthing bicycles. In 2012, Merriam opened Bubble Street Gallery—an emporium celebrating creativity and the imagination in Sausalito, California—named after his painting Bubble Street. Merriam’s artwork hasn’t been confined to this gallery, though. His paintings have traveled in exhibitions across the United States, Europe, and the Middle East. As Merriam says, his audience is universal, limited only to “those who have the willingness to see with their hearts and minds.”

Wilks: The Ultimate Alphabet: The Letter A NEW

May: Where Time Beckons