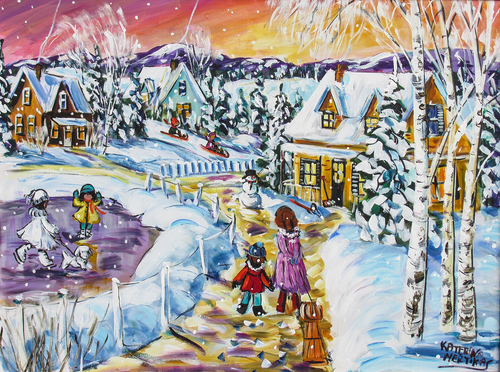 Katerina Mertikas (nee Patrinos) is a Canadian artist living in Ottawa, Ontario. Her work has been displayed in established Canadian galleries since 1992. Colorful, expressionistic and leaning towards a naïve whimsical style, Katerina’s paintings depict special, happy moments of children enjoying their daily lives. Since 1993, Katerina’s artwork has been a mainstay of UNICEF as well as many other organizations. Katerina was honoured with a Women of Distinction award in 1999, a United Way ‘Community Builder’ award in 2013; and in 2014, she was selected by her peers in Ottawa as ‘Woman of the Year’. As a mother of two daughters who inspired many of her paintings, she now finds a continued source of inspiration in her five grandchildren.

Fong: Only in My Dreams NEW