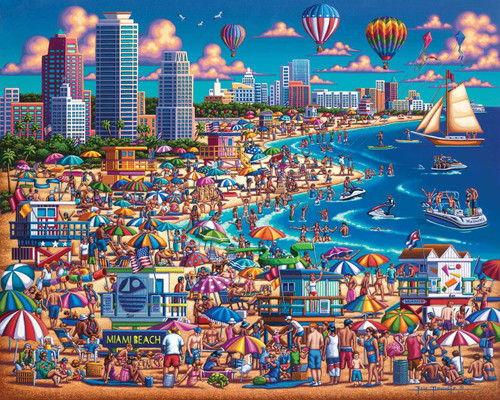 Ah, relaxing on the sunny, warm beach of Miami is only one of the great benefits of being one of the citizens that live nearby. Host to a wave of immigrants after World War II, Miami Beach went through a population explosion, adding tens of thousands in only a few decades, making the area very diverse. Because of this diversity, SoBe, as it is known is home to many cultural depictions such as the Art Deco District, featured prominently in the 1983 lm Scarface and the 1996 comedy The Birdcage. There is a large Orthodox Jewish population with well-established synagogues and yeshivas, as well as a large LGBT community. Miami Beach is also home to many arts such as the New World Symphony, established in 1987 under the artistic direction of Michael Tilson Thomas, the Miami City Ballet, and the Bass Museum of Art. The Miami Beach Festival of the Arts, an art festival started in 1974, is also held annually outdoors. 500 piece puzzle.