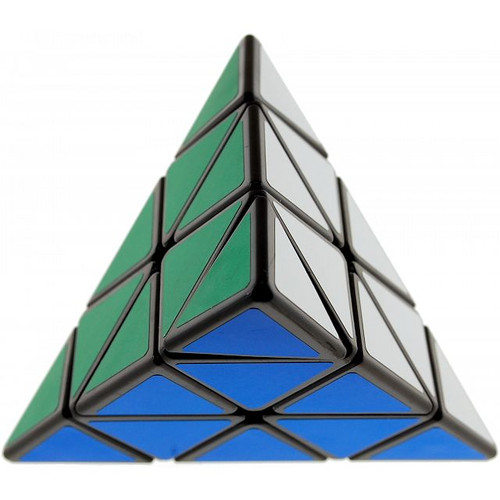 The Pyraminx was invented in the early 1970’s, by Uwe Meffert. When it was invented it was simply an interest, but worldwide success of the Rubik’s Cube brought the Pyraminx into production. The Pyraminx has so far sold over 90 million copies world wide, making it the second most popular puzzle in the world ever.

The Pyraminx can be rotated around any of its vertices by multiples of 120. This makes it hard enough to be a real challenge, but easy enough to master, without help, in a few days. It has precision injection molded parts and spring-loaded bearings which make operation easy and exact.

The Idea of the Puzzle

Scramble the colors and then return them to the initial state of four single-colored sides. There are still only 75 Million possible positions of the Pyraminx. It is Theoretically possible to solve the Pyraminx from any of those positions in 12 moves or less, but in actuality it should take about 20 moves once you have mastered it.