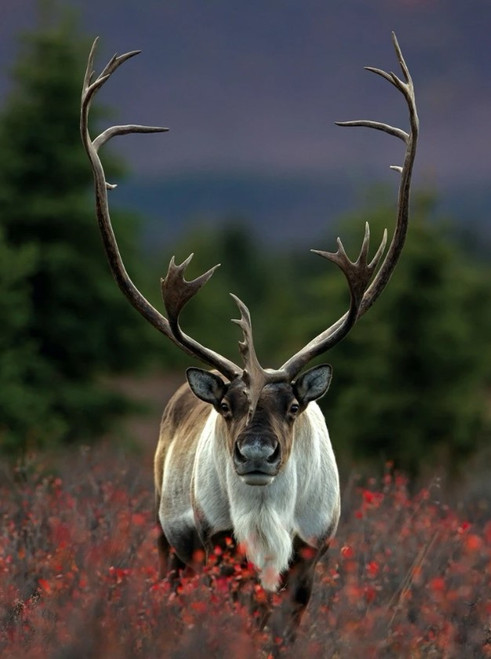 Serious Item Code: 70537  Mfr Code: NPZNG2165  Brand: New York Puzzle Co Season: Theme: Wild Life Forest & Jungle Event: Type: Difficulty: Advanced  Finished Size: 19.25'' x 26.625''
Large hoofed animals belonging to the deer family, caribou are native to Alaska, northern Canada, and Greenland. They are the only deer in which males and females both have antlers—though only some females have them. Caribou have large hooves that are useful tools for life in the harsh northlands. They are big enough to support the animal's bulk on snow and to paddle it efficiently through the water. The hoof's underside is hollowed out like a scoop and used for digging through the snow in search of food. Its sharp edges give the animal good purchase on rocks or ice. Denali National Park contains a caribou herd that currently numbers close to 2,000 animals. The size of the Denali Herd has fluctuated greatly over the last 80 years. It included over 20,000 caribou during the 1920s and 1930s but had declined by the 1970s to a low of approximately 1,000 animals. Biologists place great value on the research conducted on the Denali Herd because it is the only barren-ground caribou herd in North America of such a large size class that is currently not hunted. It also shares its range with a natural complement of large predators and both predator and prey populations within Denali are naturally regulated.