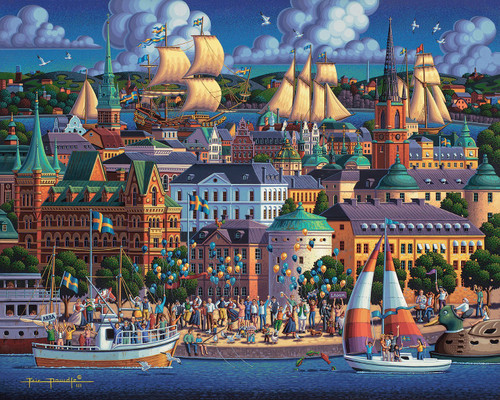 In Stock
Serious Item Code: 70755  Mfr Code: 10483  Brand: Dowdle Season: Theme: Boats Vintage & Nostalgia Monuments & Buildings Lakes & Rivers Event: Type: Difficulty: Advanced  Finished Size: 26.625'' x 19.25''
If he were alive, Birger Jarl would undoubtedly be honored to see that the small town he built in 1252 has grown into the largest city in Sweden. Stockholm established itself as the capital of Sweden in 1634, shortly after Sweden was liberated from Danish rule in 1523. Today, with its exquisite architecture, abundant open water, and numerous parks, it is easy to see why it is called “The Venice of the North.” It is also known as “The World’s Smallest Big City.” Have fun getting to know the heart of historic, beautiful Stockholm. 1,000 piece puzzle. Includes 29 facts and things to look for!

Rothenburg of the Tauber NEW