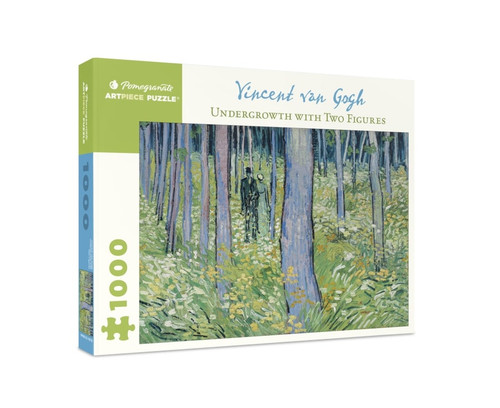 In Stock
Serious Item Code: 64501  Mfr Code: AA1028  Brand: Pomegranate Season: Theme: Van Gogh Forest & Jungle Event: Type: Difficulty: Advanced  Finished Size: 29'' x 20''
Undergrowth with Two Figures, 1890 Amid the poplars, entangled by the floral undergrowth, two lovers stand arm in arm. Their faces disappear into the forest floor. Painted the month before his death, Vincent van Gogh’s Undergrowth with Two Figures bears a haunting quality. This painting, however, was once more lively. In his later years, Van Gogh took risks with vibrant colors that were known to fade, among them the pigment geranium lake. From descriptions in his letters and through modern scans, we know that cheery pink flowers—now white—swayed amid the grasses, and those columnar blue trunks were once violet. Though Van Gogh’s hues have cooled, lost to time, Undergrowth with Two Figures is widely considered one of his masterpieces.

Vincent van Gogh’s ten-year painting career yielded more than 2,000 paintings and drawings but little recognition from the art world. Lamenting this indifference, he wrote to his brother Theo, “One may have a blazing hearth in one’s soul, and yet no one ever comes to sit by it.” Van Gogh (Dutch, 1853–1890) never did achieve the recognition he craved during his short, troubled lifetime. He sold few paintings but was known to have traded his artwork with other artists or for art supplies, food, and lodging. During periods of intense productivity, he painted at a feverish rate, sometimes a painting a day. His passionate and vividly colorful works eventually won over audiences and have helped make him one of the world’s most beloved artists.

Monet: Sailboats on the Seine