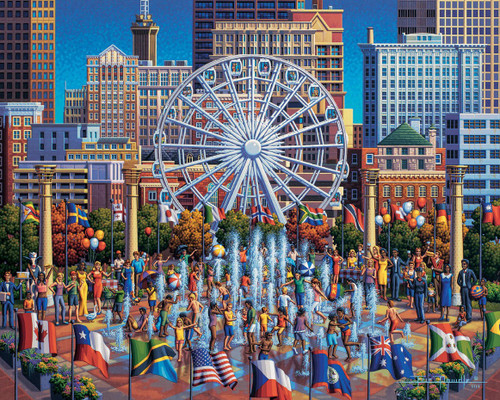 In Stock
Serious Item Code: 73099  Mfr Code: 00524  Brand: Dowdle Season: Theme: City & Place People Folk Art Monuments & Buildings Event: Type: Difficulty: Intermediate  Finished Size: 20'' x 16''
Welcome to the unofficial capital city of the southeastern United States, founded at the terminus of the Western and Atlantic Railroad in 1837 and so named Atlanta, supposedly the feminine version of Atlantic. Toward the end of the Civil War, the city was burned to the ground by General Sherman, who spared only churches and hospitals. But Atlanta rose from the ashes, which is why the phoenix is the city’s symbol. Atlanta has pushed through difficult times to emerge as a leader beyond the modern south. The city hosted the 1996 Summer Olympic Games and has hosted professional sports teams of every major league. So enjoy getting refreshed in the Fountain of Rings at Centennial Olympic Park and relax a spell in Atlanta. 500 piece jigsaw puzzle.