Bearden: Up at Minton's - 1000pc Jigsaw Puzzle by Pomegranate 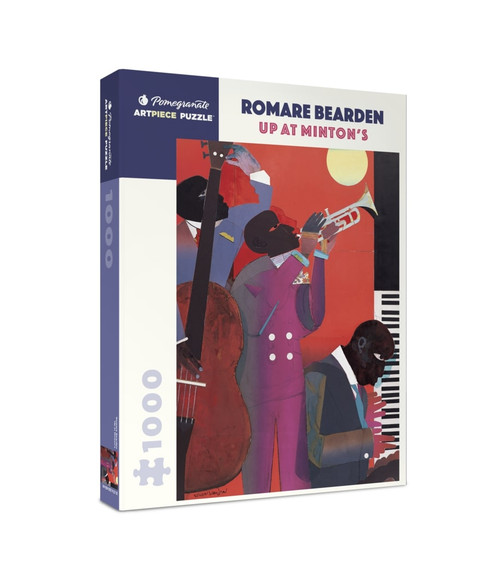 Bearden: Up at Minton's - 1000pc Jigsaw Puzzle by Pomegranate

In Stock
Serious Item Code: 71420  Mfr Code: AA1111  Brand: Pomegranate Season: Theme: Music Black Art & Artists Vintage & Nostalgia Event: Type: Difficulty: Advanced  Finished Size: 20'' x 27''
Up at Minton’s, 1980 One of America’s foremost artists, Romare Bearden depicted many aspects of 20th-century African American life in his art. But no other subject so captured his attention, or inspired him to produce such extraordinary artwork, as did music. Bearden created a body of work that stands as a diary of evolving blues and jazz during the Harlem Renaissance. Up at Minton’s, reproduced on this 1000-piece jigsaw puzzle, richly evokes a moment when harmony extends beyond the music, filling the soul with peace and delight.

One of the 20th century’s preeminent artists, Romare Bearden (American, 1911–1988) lived and worked during a period of unprecedented growth and vitality in American society. His diverse oeuvre—including collages and photomontages; mosaic murals; designs for stage sets, record album covers, and books; and watercolors, oils, and monotypes—reflects the creative ferment of his time. Deeply impassioned about the people, issues, and ideas that shaped the world, Bearden imbued his work with a humanism that transcends time and place. Bearden received numerous awards and honors, including the National Medal of Arts and several honorary doctorates. His work is in many major collections, including those of the National Gallery of Art, the Museum of Modern Art, and the Studio Museum in Harlem.

Keith Mallett: Sisters of the Sun