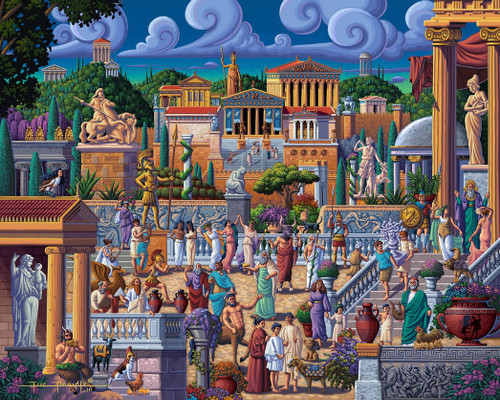 In Stock
Serious Item Code: 71336  Mfr Code: 10486  Brand: Dowdle Season: Theme: City & Place People Vintage & Nostalgia Monuments & Buildings Event: Type: Difficulty: Advanced  Finished Size: 26.625'' x 19.25''
Welcome to the central Mediterranean country of Greece, over 2000 years ago. The Western World owes much to Ancient Greece for our traditions in art, sports, politics, religion, philosophy, mathematics, and science, almost every aspect of our lives. Alexander the Great built an empire that opened vast stretches of the world to a common bond. Rome continued many Greek traditions around the world, building on the empire of Alexander. This made the spread of revolutionary ideas of middle eastern religion possible. We still encounter the ancient culture in our daily lives. This puzzle of Ancient Greece finds us at the foot of the Acropolis, rubbing shoulders with some giants of Greek culture, as well as Greco myths and legends.