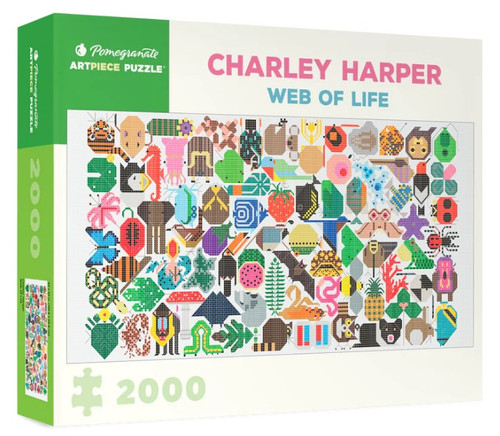 In Stock
Serious Item Code: 72309  Mfr Code: AA1110  Brand: Pomegranate Season: Theme: Animals Collections & Collages Charley Harper Event: Type: Difficulty: Extreme  Finished Size: 40'' x 20''
Web of Life, 1986 From cardinal to chili pepper, cowfish to cyanobacterium, Charley Harper’s Web of Life brings together 81 interconnected life-forms in a colorful homage to the biological sciences. Worked in his signature minimal realism style, this celebrated ceramic tile mural is showcased within Pearson Hall, a sciences hub on the campus of Miami University, Oxford, Ohio. Harper, a wildlife artist as well as a lifelong naturalist and conservationist, said, “I regard the picture as an ecosystem in which all the elements are interrelated, interdependent, perfectly balanced . . . in a world of chaos, the picture is one small rectangle in which the artist can create an ordered universe.” Harper’s entire mural, made of thousands of small tile squares, is reproduced on the included key. All of the identified species are depicted on this delightfully challenging 2000-piece jigsaw puzzle.

Midcentury modernist Charley Harper (American, 1922–2007) portrayed the natural world with heart and humor. In vivid colors and simple shapes, his cardinals, ladybugs, and clever critters have become icons of wildlife art. His illustrations were published in magazines and books, notably Ford Times and The Giant Golden Book of Biology. A longtime conservationist, Harper created posters for more than 50 nature- and conservation-oriented organizations. His US National Park Service posters—massive, requiring a year each to paint—showcase delightful depictions of entire ecosystems in a style he defined as “minimal realism.” In his adopted hometown of Cincinnati, his public works are the legacy of an artist truly beguiled by the wild, one whose art was a quiet catalyst for ecological action.

Harper: The World of Birds

Harper: The World of Birds