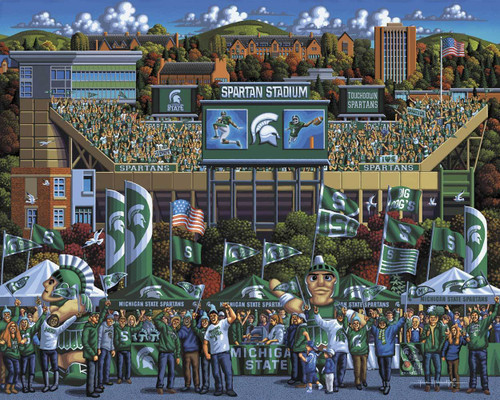 Though often over looked in lieu of its older, smaller in state rival, Michigan State University has been serving the needs of the people of Michigan since 1855. The school was the first of the land grant universities under the Morrill Act (signed by President Lincoln.) Known for many years as the Aggies, in 1925 the school adopted the nickname of Spartans with a mascot named Sparty. They are the green and white nemesis of the Big 10 and a perennial contender – as marked by their 6 National Championships. This painting captures the festivity of a crisp fall game day inside and outside of Spartan Stadium. Welcome to East Lansing, MI and now get your “Sparty On.” 500 piece puzzle.