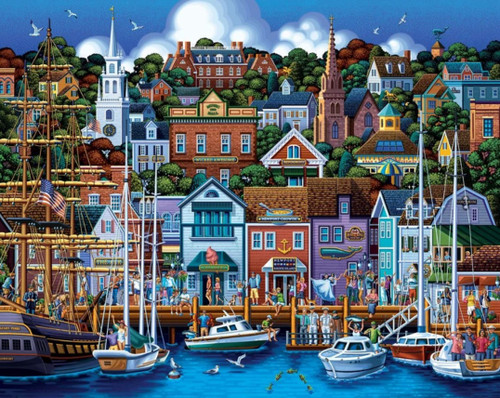 In Stock
Serious Item Code: 70678  Mfr Code: 00468  Brand: Dowdle Season: Theme: Boats People Folk Art Cabins, Cottages, Houses United States Event: Type: Difficulty: Intermediate  Finished Size: 20'' x 16''
Newport, RI was established by the remarkable Ann Hutchinson and her followers when they were driven out of Boston in search of religious freedom. They settled on Aquidneck Island in 1636, alongside the native residents. This history has led to a culture of diversity down to today. Newport was the Capital of Rhode Island when the state became the first to declare independence from Great Britain. It became a hub of seafaring, U.S. Navy operations, and was home to the America’s Cup from 1930 – 1983. Although it is known for its opulent mansions, built by Industrial Age titans, Newport has the largest number of colonial homes still in use today. Take a stroll through the heart of “Old Town” Newport with Eric Dowdle in this entertaining puzzle. 500 piece jigsaw puzzle.