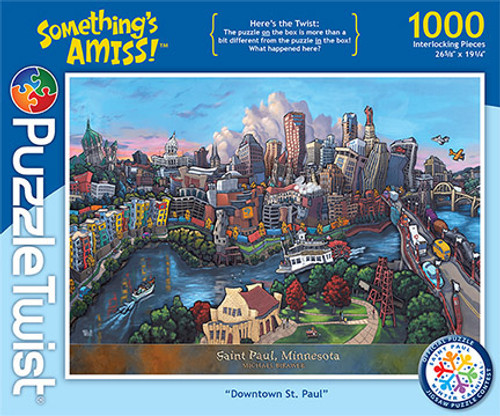 In Stock
Serious Item Code: 65742  Mfr Code: 10118  Brand: PuzzleTwist Season: Theme: Monuments & Buildings United States Event: Type: Adult Activity Puzzles Difficulty: Advanced  Finished Size: 26.625'' x 19.25''
This puzzle created for the St. Paul Winter Carnival Jigsaw Puzzle Contest takes you on a colorful, whimsical tour of Minnesota's state capitol, St. Paul. Here's your chance to complete the official puzzle from the contest and test your puzzle skills. This puzzle was created for the 2015 St. Paul Winter Carnival Jigsaw Puzzle Contest. 72 teams competed to complete the PuzzleTwist® jigsaw puzzle featuring Michael Birawer’s striking painting of Downtown St. Paul. The Jigsaw Puzzle Contest was truly an enjoyable experience for the contestants given Michael Birawer’s unique image and the challenge of a PuzzleTwist jigsaw puzzle. The teams discovered some fun and unexpected surprises, including some Winter Carnival additions. The Adult Division winning team completed the puzzle in 90 minutes while the Family Division winning team completed the puzzle in 119 minutes. The “Downtown St. Paul” image was originally painted by Michael Birawer in 2008. Michael was excited to be a part of the Winter Carnival event as he is from St. Paul. At the conclusion of the jigsaw puzzle contest Michael made a surprise appearance, congratulated the winners and signed jigsaw puzzles for the contestants.

Lots happening in downtown St. Paul. Are you able to catch the 25 differences between the puzzle you assemble and the box image?

Something's Amiss! Here's the Twist: The puzzle on the box is more than a bit different from the puzzle in the box! What happened here?