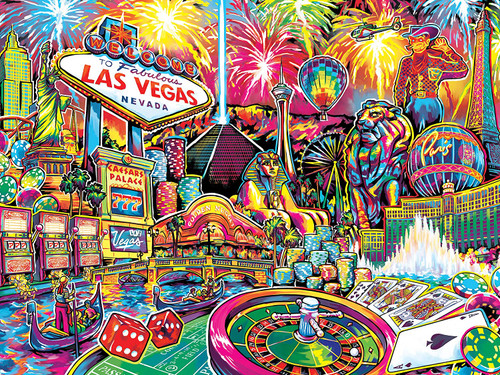 550 piece vivid color puzzle. Las Vegas bills itself as The Entertainment Capical of the World, and is famous for its mega casino-hotels and associated activities. It's a top three destination in the United States for business conventions and a global leader in the hospitality industry, claiming more AAA Five Diamond hotels than any other city in the world. Today, Las Vegas annually ranks as one of the world's most visited tourist destinations. The city's tolerance for numerous forms of adult entertainment earned it the title of "Sin City," and has made Las Vags a popular setting for literature, films, television programs, and music videos.

It's also home to one of SeriousPuzzles.com's warehouses!