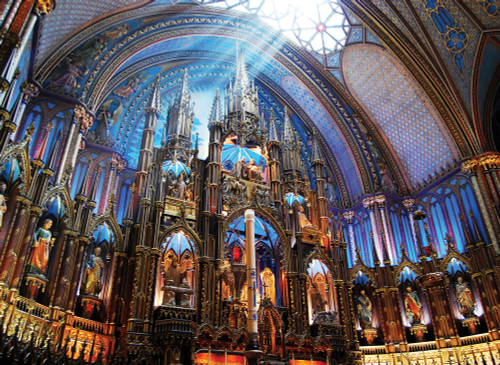 In Stock
Serious Item Code: 22591  Mfr Code: 50-059  Brand: Tomax Season: Theme: Churches & Temples Event: Type: Glow in the Dark Difficulty: Intermediate  Finished Size: 20.5'' x 15''
Take a peek at the ornate sanctuary of a Roman Catholic basilica, you've arrived just in time; beams of afternoon sunlight stream through crystal windows above, casting a nearly divine glow on the intricate interior architecture.
Located in the historic district of Old Montreal, the basilica was designed and built in the Gothic Revival style; its architecture is regarded among the most dramatic of its kind.

When the puzzle is complete, hold a light over it for a few moments and then view it in the dark (or under a black light) and see the glowing effect!
TOMAX has been specializing in jigsaw puzzles for over two decades and expanded their line from 12 images to more than 400 over a variety of piece counts, running as high as 4000 pieces! They have something for just about everyone.