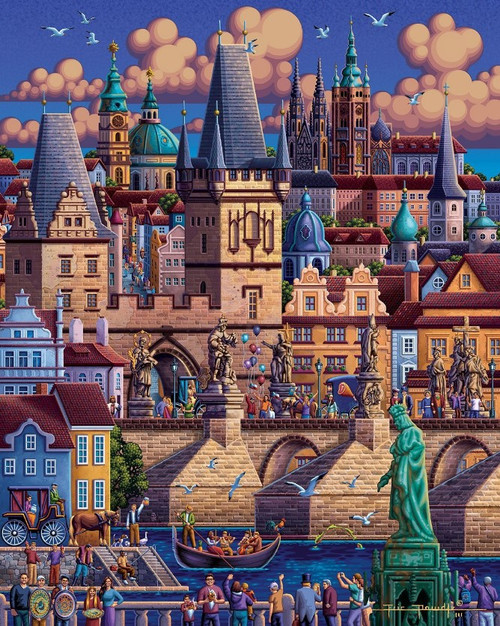 In Stock
Serious Item Code: 71334  Mfr Code: 00472  Brand: Dowdle Season: Theme: Boats People Monuments & Buildings Bridges Lakes & Rivers Event: Type: Difficulty: Intermediate  Finished Size: 16'' x 20''
Prague is aptly known as "City of a Thousand Spires." The history of this beautiful capital stretches back thousands of years. A Celtic tribe known as the Boii were the initial settlers, and is where the term Bohemia is derived. "Czech" probably comes from a Slavic chief who brought his people to Bohemia. In the sixth century, a Czech Sovereign named Princess Libuse saw a vision of a castle called Prague chiseled on the banks of the Vltava River, "whose glory will reach the stars." She nailed it. The castle and the city have come to be loved by all that know it. The city has seen various alliances and occupations over time, which only seems to make people stronger and resilient. Prague was the headquarters of the Catholic Church for a time. Known for its "cursed" clock and famed for scientists and artists, Prague not only is the geographic heart of Europe, but arguably Europe's heart. Czech Republic. 500 piece jigsaw puzzle.