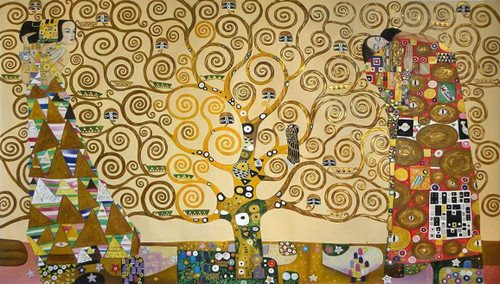 In Stock
Serious Item Code: 69345  Mfr Code: PLF1196  Brand: PuzzleLife Season: Theme: Klimt Vintage & Nostalgia Event: Type: Difficulty: Advanced  Finished Size: 29'' x 20''
The painting is a study for a series of three mosaics created by Klimt from 1905-1911. The mosaics were created in the artist's Late Works period and depict swirling Trees of Life, a standing female figure, and an embracing couple. The Tree of Life is an important symbol in nearly every culture. With its branches reaching into the sky, and roots deep in the earth, it dwells in three worlds- a link between heaven, the earth, and the underworld, uniting above and below. It is both a feminine symbol, bearing sustenance, and a masculine, visibly phallic symbol- another union. 1,000 piece jigsaw puzzle.

The Tree of Life