Wilks: The Ultimate Alphabet: The Letter A - 1000pc Jigsaw Puzzle by Pomegranate 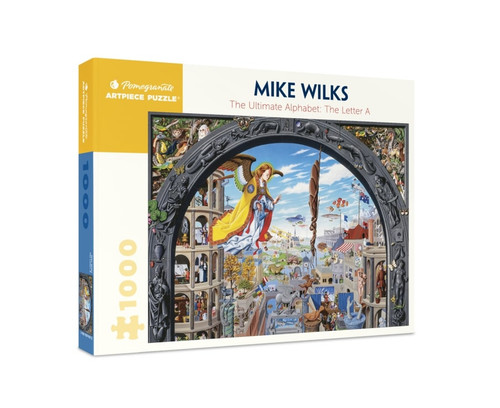 Wilks: The Ultimate Alphabet: The Letter A - 1000pc Jigsaw Puzzle by Pomegranate

In Stock
Serious Item Code: 60328  Mfr Code: AA922  Brand: Pomegranate Season: Theme: Alphabet & Number More Art Art Event: Type: Adult Activity Puzzles Difficulty: Advanced  Finished Size: 27'' x 20''
The Letter A, 1982 From The Ultimate Alphabet Artist Mike Wilks has a challenge for you: “Try to spot an amputee (he is also an athlete although not animate), an abbey, an apricot, an atlas (naming the oceans and continents that you find there), an artilleryman and his ammunition, an aardvark, an autogyro (why should it be upside down?), an ark full of animals, an aerial paled by the distance, and the Egyptian god Anubis and a close colleague.” The list goes on, with a total of 361 items to discover as you puzzle. From the best-selling book The Ultimate Alphabet, The Letter A is the beginning of an alphabet adventure. Can you find all of the A words depicted in this 1,000-piece jigsaw puzzle? If not, check out the list and key included inside.

The art of Mike Wilks (British, b. 1947) is characterized by intensely realistic (sometimes surrealistic) detail—think art appreciation and a game of discovery, all in one. Wilks began his artistic career at 13 when he won a scholarship to art school. He ran a successful graphic design business for five years before he sold it and began writing and illustrating books in 1975. He rocketed to fame following publication of The Ultimate Alphabet in 1986; the puzzle book was a global bestseller. Each image contains dozens, if not hundreds, of items, all beginning with the same letter of the alphabet. After eight illustrated books, he established himself as a novelist with The Mirrorscape Trilogy, a fantasy adventure series. Wilks, who was the subject of an award-winning British documentary, lives in London. His drawings and paintings now reside in museums, galleries, and private collections around the world.

Wilks: The Ultimate Alphabet: The Letter B NEW