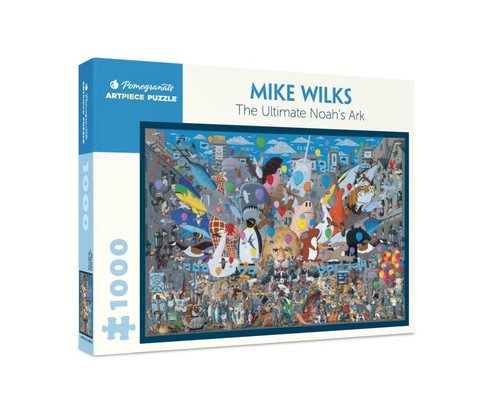 In Stock
Serious Item Code: 60309  Mfr Code: AA895  Brand: Pomegranate Season: Theme: Animals More Art Spiritual / Religious Art Event: Type: Difficulty: Advanced  Finished Size: 29'' x 20''
The Ultimate Noah’s Ark, 1990–1992 From The Ultimate Noah’s Ark, by Mike Wilks Two by two, over 700 quirky creatures crowd this eye-twisting, brain-teasing painting by artist and author Mike Wilks. In his book The Ultimate Noah’s Ark, Wilks challenges sharp-eyed viewers to find “a vociferous insect and a bird with a loud voice,” “a mammal with a nose for luck,” “a talkative antipodean,” and a single creature “alone and without a mate.” Might the mateless, mystery creature be clad in a gray business suit and playing a musical instrument? The search begins as you tackle this fascinating 1,000-piece puzzle.

The art of Mike Wilks (British, b. 1947) is characterized by intensely realistic (sometimes surrealistic) detail—think art appreciation and a game of discovery, all in one. Wilks began his artistic career at 13 when he won a scholarship to art school. He ran a successful graphic design business for five years before he sold it and began writing and illustrating books in 1975. He rocketed to fame following publication of The Ultimate Alphabet in 1986; the puzzle book was a global bestseller. Each image contains dozens, if not hundreds, of items, all beginning with the same letter of the alphabet. After eight illustrated books, he established himself as a novelist with The Mirrorscape Trilogy, a fantasy adventure series. Wilks, who was the subject of an award-winning British documentary, lives in London. His drawings and paintings now reside in museums, galleries, and private collections around the world.

Wilks: The Ultimate Alphabet: The Letter B NEW

Wilks: The Ultimate Alphabet: The Letter A